"Where does INCLUSION work?" 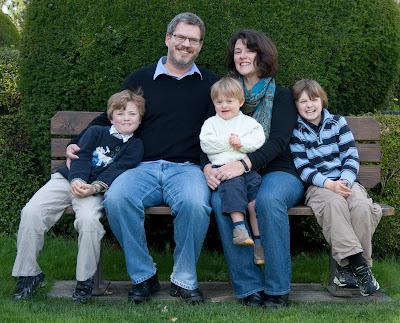 photo by Nancy Yakimoski at Blue Sky Photography
Posted by Carol N. at 1:09 PM 1 comment: Links to this post

Inclusion is an approach, not a program.
An attitude, not an activity.
Inclusion is not just a special education or disability issue.
Inclusion is belonging no matter what. 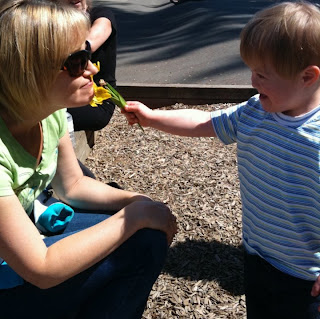 This is Aidan with our friend, Michelle.
Michelle loves Aidan, and Aidan loves Michelle.
Inclusion makes loving easier :o)
Posted by Carol N. at 11:21 AM No comments: Links to this post

Including Aidan - and things that keep me up at night

I recently spoke to an elementary special education class at our local university as a follow-up to the viewing of the documentary:  Including Samuel.   I was invited as someone at the beginning of the school journey; and, was joined by two other moms whose children had been in the system for a while. The professor had this poster outside of her office door: 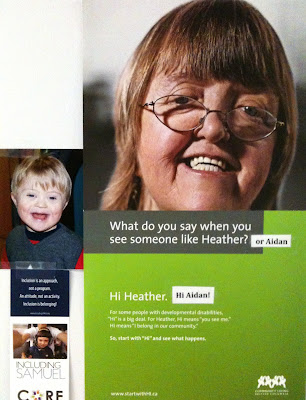 I must say, I smiled wide when I saw what (and whom)she'd added to it. Funny, but when I first saw this poster, it was in the hallway at our local elementary school, and I remember thinking, "that's interesting, we should make a similar poster with Aidan on it."

Then, during our discussion, one of the guest speakers spoke about "normalcy" and not separating our children with special needs out.  She is an advocate for as complete inclusion as possible.  Her daughter is not pulled out of the class for most therapies - those are done at home.  She spoke about how important it is to her that we NOT make our children the "poster child" for disabilities.

Hmmm.  Suddenly I had to re-think everything I've been doing since Aidan was born.  So far his photo has been on the side of a bus, in the paper, and he's been on television three times (twice about Music Therapy, once for the Telus Flight with Santa).  I post his photo all over our flickr family page, and have joined three flickr groups about Down syndrome, and started one myself called Down syndrome in the Family.  Not to mention blogging about Aidan and Down syndrome in the 31 for 21 challenge, and posting on Facebook about Spread the Word to End the Word campaign.  I even went so far as to have my on-line friend Erin make this poster for me: 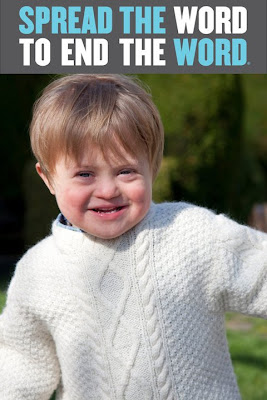 Now, have I been inadvertently achieving the opposite of what I set out to do?  Have I been moving Aidan backwards instead of forwards?  Have I kept Aidan in the box on the shelf labeled "disabled?"  Have I opened the doors for inclusion to happen naturally and effectively, or have I placed hurdles in Aidan's path?

I have to keep thinking about this.  It's good to get different perspectives, and it's good to question ourselves sometimes.

At any rate, these are the thoughts that keep me up at night.
Posted by Carol N. at 6:15 PM 5 comments: Links to this post Thinking About Inclusion and Paradigm Shifts

I was honoured to be one of the panelists at the screening of the incredible documentary, Including Samuel at the University.  There were four of us sharing our responses to the film and our hopes and fears about inclusion for our children.  I was invited because Aidan is just beginning his journey into the system.


What stood out for me the most was the answer to the question, "Where does inclusion work?"
The answer, drumroll please.....
"In the family."
Whole heartedly.
Proudly.
Rewardingly.
As I watched the film I kept thinking of my father in the 1970's and how he wasn't included.  He was sent off to a hospital where he wore his pajamas all day while watching television in the sitting room. Our family watched as the paradigm shifted.  As patients began to be dressed for their day.  Still watching television, but given some dignity while doing so.

Things changed at the hospital, so my dad's entire ward  was re-located to an institution.  The Funny Farm - people in our town called it.  A different ward than that for the insane or mentally challenged: this ward was a chronic-care ward which housed mostly very old people. Dad was the youngest one there, at first, until a teenager who had been in a car accident and was paralyzed, and speechless was admitted and shared a room with him.

Over time, as the paradigm continued to shift, people in the chronic-care ward were taken out into the community to do "regular" things.  Bowl, with a trough-like plank on their knees to push the bowling ball down the alley from their wheelchair.  Shop at the mall, and eat in the food court.  They were even taken on the Chi-Cheemaun ferry cruise from Owen Sound, up to it's summer spot in Tobermory.

For those outings, I skipped school and went along too.  It was fiercely important to me.  You see, Dad had been a Captain and Pilot on the grain ships before his illness stopped him in his tracks.  So, the trip on the ferry was very important to us. I would go along as a helper, and during one of the earlier trips I pushed my dad's wheelchair to the bough of the ferry so he could look out the window and enjoy the scenery of Georgian Bay.  A group of "typical" people were sitting nearby, and when they saw us coming, they looked disgusted; like we were going to ruin their ferry-cruise experience.  They ended up moving seats to be further away from us.

I remember being so hurt by that.  I didn't know how to handle it, I just felt it like I'd been kicked in the stomach.

Fast forward fifteen years.  The trips continued - but I was living out West at the time; so I didn't go.  Mom always told me about it, and sent photos.  On one occassion, the Captain of the ferry invited my Dad up to the wheelhouse to visit with him.  It took several workers to lift dad up the narrow stairs; but they did it.

That's something else I'm fiercely proud of.  That times change.  That attitudes change. That individuals like my dad were finally given a fair shake and the respect they deserved.

I've got more to say on the Including Samuel documentary and Aidan, but that will have to wait for another post.
Posted by Carol N. at 11:47 AM 2 comments: Links to this post 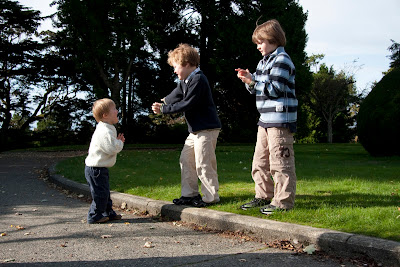 Your family is perfect.
Take heart that more and more people are becoming aware.
Change is slow, but so worth educating for.

I wrote that on Bethany's blog, and realized it's what I needed to hear too!
I send that message out to everyone who is spreading the word to raise awareness about how much the "R" word hurts us.  People are hearing the message; it's making people think - which is always a good thing. 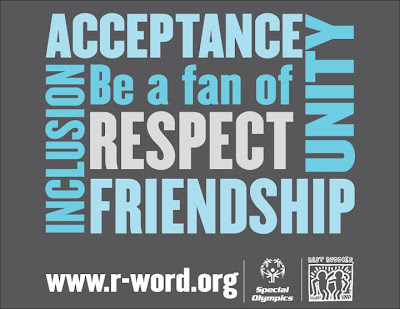 Posted by Carol N. at 3:38 PM No comments: Links to this post