Where Poetry and Tae-Kwan-Do Collide

Aidan gets a lot of air time on the old blog....maybe because he's the smallest, and I spend the most time with him (the big boys are at school). Perhaps it's because he has Down syndrome and it seems right to write/advocate/share/chronicle, etc., about Down syndrome on the blogosphere.  I don't think the big billy goats mind that they aren't written about as much.

But, every so often an anecdote comes to mind about the other boys, and I want to put it down so I remember.

So....
This is a story about the middle-est billy goat,
Liam.
Age 9.
And poetry.
Oh, and a little tae-kwan-do too.

Liam is a fidgety boy.  He bounces, spins, fidgets, plays drums on his knees, does strange things with his cheeks, and we love him whole heartedly.

We put him in tae-kwan-do to try to learn some self-discipline and self-control.  Also for some physical activitiy which he was craving. 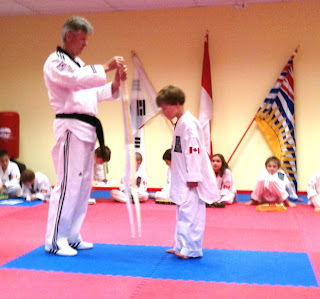 At school, he is fidgety, and not getting down to work.  I went in to talk to his teacher.  She explained that they were writing two word poems.
She said that he right away wanted to do his poem on tae-kwan-do.
No surprise there.
His poem was as expected, about a dojang, white dobak, high kicks....
and the last line of his poem was difficult to read,
but it looked like: "bar fights."

Hmmmn.  His teacher looked at me.
I looked at her.
We chuckled and shrugged.
I was thinking did he get that from Bugs Bunny?

Later, in the car (on the way to tae-kwan-do), I remembered his poem, and told him I thought it was terrific...but that I couldn't quite read the last line.  How did it go, again?

Liam sounds a lot like my Samantha...we have had lots of conversations with her teacher about her being fidgety at school too. We've often wondered if tae-kwon-do would be something she would enjoy. We'll have to think on it again. Sounds like Liam's poem was perfect!