I Dream of Old Brick Houses

When I was home this Spring, I took a drive over to Wiarton and knocked at the door of this old brick house. I told the young woman who answered that my Grandparents used to live there, and would she mind very much if I took a picture?

This house has haunted my dreams for over twenty years. My grandmother's house, and the place where much of my childhood roamings took place.
On the side porch were two things that held my young attention.  First, the piano: an old upright Gerard Heintzman.   I would sit and lose myself in made-up melodies (really bad ones, I should add - I didn't know how to play).   I never knew anyone who played it during my time except my sister and me, but I recently learned that before my grandfather passed away, my Aunt Margery would play Christmas songs, and my Grandpa would sing.  Apparently he had a great singing voice.
The other thing that captivated me for hours of childhood was a white cupboard that held my Grandpa's medical equipment.  Gosh, I just imagined opening the cupboard and the old smell (not an unpleasant one) just came back to me.  Memories are incredibly powerful, aren't they?
The cupboard held the most interesting things - glass needles, sutures, cotton swabs, forceps, a glass eye-wash thingy, tongue depressors, and a multitude of other medical stuff.  Funny that his stethoscope wasn't in the cupboard - instead it was in the toy box in the big old kitchen.  I wish I had a photograph of that cupboard, but I never knew then that it wouldn't be there forever. . . such is the life of a child - we don't understand what old poets already know, that nothing gold can stay. 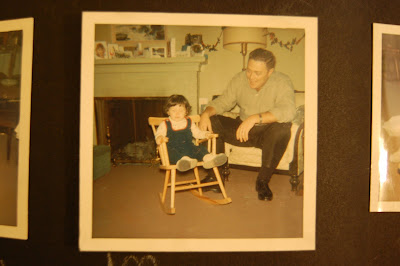 In this room we spent hours making up dances as we watched The Irish Rovers.  Another thing I don't have a photograph of - so this one of Bev (my big sister) and my Dad will have to do.
Posted by Carol N. at 6:43 AM

Oh, memories are SO powerful! I have many memories that are linked by particular smells/scents. Not recognizeable ones, but just ones that trigger a memory, or a memory that triggers a smell. Weird. I wish that home owner had let you come inside, too, though, or would that have spoiled the memories?

I'm currently sitting in the kitchen of the house my grandparents lived in my whole life. My father lives here now, and it's nearly unrecognizeable (thankfully) from the house it was when it was built in the early 70s. 70s decor just would not fly now...

I love hearing about your childhood memories! Nostalgia grips me, too.